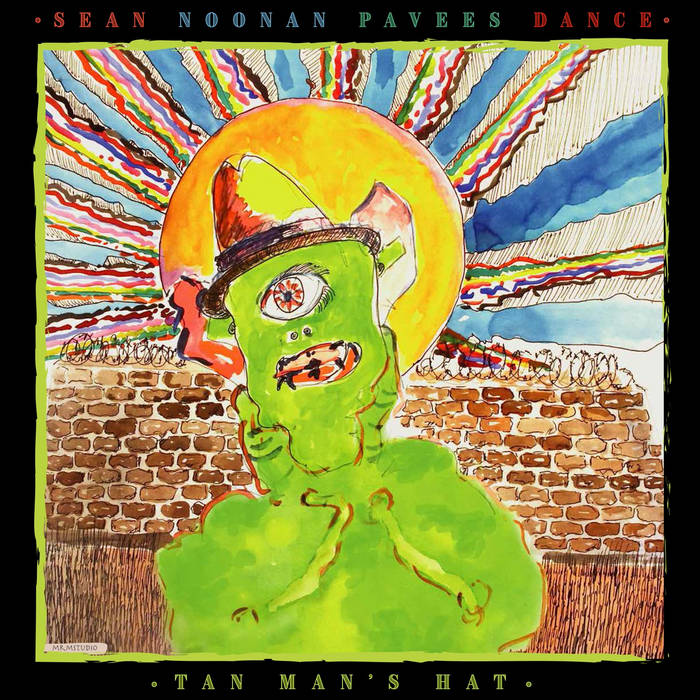 Tan Man’s Hat confronts the listener with a vibrant, shocking swirl of sound, a dauntless tempest of varied influences: prog rock and avant-garde classical create sparks from clashes with harmolodic improvisation and African folk traditions, with jolting infusions of psychedelia and campfire tales. The band also thrives on its blend of generations, with experimental elders Mooney and Tacuma passing a still-blazing torch to their cutting-edge compatriots.

While Noonan’s “wandering folk” approach to collecting the stories of diverse cultural traditions spans the globe, the name of Pavees Dance is rooted in his own Irish heritage. Pavees are members of the Emerald Isle’s nomadic ethnic minority, traditionally occupied as traveling tinkers and craftsmen, skilled at crafting items from available materials – a gift shared by Noonan, whose distinctive compositions are a patchwork of eclectic inspirations made new and vital in his deft hands.

“Pavees is the Irish word for a traveling musician and tinker, a sort of gypsy who collects and creates things,” Noonan explains. “That fits in perfectly with the wandering storyteller concept I’ve been developing throughout my work, merging West African and Irish storytelling traditions. The name Pavees Dance really embodies that.”

The music of Pavees Dance is enlivened by the inventive lyrics of singer, poet and visual artist Malcolm Mooney, founding vocalist for the iconic krautrock band Can. In collaboration with Noonan, he works with lyrics the way that a jazz musician uses their instrument, using written material as a leaping-off point for improvisatory flights. “Malcolm develops or adapts lyrics on the spot,” Noonan explains. “I gave him a road map for each of the songs and then let him do his thing. He shaped his own stories from the ideas that I gave him, which was a really meaningful way for me to develop as a lyricist and to evolve myself artistically.”

In essence, Mooney’s spontaneous approach to reinventing his own lyrics has strong parallels with Ornette Coleman’s ground-breaking harmolodic system, which bass virtuoso Jamaaladeen Tacuma knows first-hand from his time in the legendary saxophonist’s electric Prime Time band. “Being a drummer, the bass player is like my dance partner,” Noonan says. “This music is heavily based on the drum and bass relationship, so Jamaaladeen’s voice is a dominant aspect in my instrumental writing, which is always heavily influence by harmolodic theory.”

There’s Always the Night, Pavees Dance’s 2014 debut release, featured a quartet version of the band featuring Mooney, Tacuma, and guitarist Aram Bajakian. The latter’s relocation to Vancouver allowed for a reimagining of the band, with California experimentalist Ava Mendoza (who has worked with the likes of Nels Cline, Fred Frith, Mike Watt and Ikue Mori) to take over on guitar while Marcelo, a longtime collaborator dating back to Noonan’s notorious punk/jazz band The HUB, to expand the sound with his singular approach to the keyboards.

“I really wanted to keep the element of electric guitar in the music, because the loudness and the extremeness of what you can do with that instrument really fits Malcolm’s voice,” Noonan says. “But I was writing these intricate through-composed works using tone rows and concepts like that, so adding Alex allowed me to include the elaborate countermelodies and harmonies that I was hearing in my head.”

The complexity of the music becomes a vibrant setting for the far-reaching stories told throughout Tan Man’s Hat. The album opens with “Boldly Going,” which takes the aspirational opening message from Star Trek to envision a journey beyond the stars on Starship Earth, an alluring vision given the increasingly tumultuous nature of life on the home planet.

Science fiction has always provided a fertile ground for address real-life issues by way of fantastical metaphors. Sharing that aspect with “Boldly Going,” “Martian Refugee” takes on the idea of how to welcome outsiders via an interplanetary twist, accompanied by a playfully skewed angular groove. While Noonan has never viewed his work as a vehicle for “protest music,” the addition of Mooney added a healthy dose of socio-political commentary to the heady mix.

“You can never really escape from the things that are going on in the environment around you,” Noonan allows. “I would often try to ignore those things in my music; I wanted to take people’s minds off the reality of what’s happening in the world and away from the divisions that separate us. For this project, though, it made sense to explore that territory for the first time. Malcolm is an African-American who came up in the 1960s and ‘70s, and he has very outspoken positions about equality and discrimination. Being blunt and saying exactly how he feels is just something that comes naturally to him.”

“Tell Me” expresses that bluntness with an invigorating urgency, with Mooney spitting acid-tinged rebuttals to political and media falsehoods and the military-industrial complex over a full-throttle pulse. Not every song has such hot-button origins, however. The churning rock aggression of “Girl from Another World” offers a more straightforward alien encounter tale, while the playful “Turn Me Over” is a slice of avant-garde vaudeville, a fairy story about a genie unleashed from the grooves of a vinyl record.

The ferocious “Gravity and the Grave” is a true collaboration between the two lyricists’ minds, with Mooney taking a song Noonan penned about the grave and adding the notion of gravity, providing a tension between the rarefied air of dreams and the grounding fatality of death. A similar acceptance of the cyclical nature of existence lies at the heart of the serrated musings of “The End of the Inevitable.” Co-written with Günter Janovsky (as is “Girl from Another World”), “Winter Inside” closes the album on a note of romantic melancholy, filled with vivid imagery more evocative than explanatory.

Where the bulk of Tan Man’s Hat consists of freshly-written lyrics, the words to the title song actually date back nearly a half century to Mooney’s time in Can. The band recorded a demo version of the song at that time, but it’s never been released; Noonan composed new music, transforming the piece into a wistful, gradually accelerating ramshackle blues.

Sean Noonan first came to the public’s attention as the drummer of the punk/jazz trio The HUB in the late ‘90s, quickly integrating himself into the famed Knitting Factory scene. His path was diverted four years later when a near-fatal car wreck in Italy led to a long period of recovery and a dedication to combining his two musical loves: jazz and African rhythms. The ensuing sonic wanderlust fueled a 2008 trek to Bamako, Mali, to gain a first-hand experience of West African griot traditions alongside Malian singer/guitarist Abdoulaye Diabaté. That trip culminated in the multi-cultural album Boxing Dreams, one manifestation of Noonan’s amorphous Afro-Celtic project Brewed By Noon.

The treasures that he finds along the paths of his story-collecting travels are filtered through his distinctive vision to become the unpredictable and far-ranging sounds of Noonan’s wide-spectrum music, which combines the eloquence of an Irish bard, the narrative rhythms of Samuel Beckett, and the raw physicality of a street-smart boxer.

That nomadic muse has led Noonan in a wealth of unexpected directions, resulting in an explosion of dynamic releases and projects spanning more than 20 albums, most recently on The Aqua Diva, the latest manifestation of the jazz-meets-Scheherazade fantasies created by his trio Memorable Sticks. In 2018, he premiered his 13-piece Rock Opera Zappanation, at the International Festival "Ai Confini tra Sardegna e Jazz" in Sardinia. The piece, dedicated to Frank Zappa and Edgard Varèse, reflects Noonan’s affinity for two composers who share his tendencies toward absurdist humor and baffling rhythmic complexities.

Bandcamp Daily  your guide to the world of Bandcamp

Featured sounds by K.Spark and WIZDUMB, plus Basi joins the show to discuss his latest release.